Our back door is our most used entrance so therefore our shoes started to pile up there. It got to the point where we had 4-5 pairs of shoes by the back door at any given time and honestly it started to drive me crazy. My mom actually found a reel on Instagram of someone attaching hooks to a board, attaching that board to the wall, and then hanging shoes on the hooks. I thought it was a good idea and seemed like a pretty quick and easy solution for a pain point in my life. 😆 Instead of attaching an entire board to the wall though, I decided to just screw the hooks straight into the wall. The wall isn’t drywall and is instead staggered boards so I didn’t want something else sticking out from the wall to make it more obtrusive into the space.  I went to Lowe’s and bought 10 cheap matte black hooks so I could hang up 5 pairs of shoes. Below is video of the space before I started and I explain what the plan is as well (the captions on the screen are what I’m saying so you can watch without sound if you choose!).

Once I had the hooks in hand, I started by drawing a level line across the wall about where I thought I wanted the hooks to hang so that they wouldn’t look all wonky when I screwed them in place. Then I held the hook up to the wall and traced the screw holes. Next I drilled pilot holes for the screws and then attached a couple of the hooks to make sure there was adequate spacing so the shoes wouldn’t bump into each other too much. I ended up spacing them around 4.5″ apart from center to center of each hook. 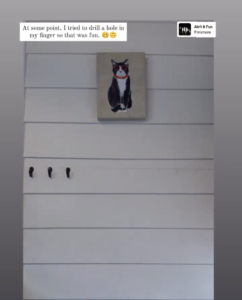 Here’s a still shot of the first few hooks installed. 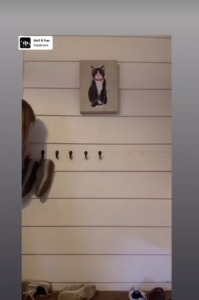 As I hung more hooks, I kept placing the shoes periodically to make sure everything looked good.

Once I had a better idea of where I wanted to hang the hooks, I just kept going until all 10 hooks were in place. I did have a bit of an issue with the line being completely level as I moved down the wall. As the caption says on the video, I don’t think the board was the same width all the way across and the caulk wasn’t consistent so the line ended up a little off. I had to tweak a few things to get it to look right despite the line being “level.”

There’s not a ton to this project since it’s literally just screwing some hooks into the wall. The hardest part was making sure they were all level and the spacing was relatively even. I cared more about the practicality here than I did the aesthetics of it.

Here’s the finished product! It might not be everyone’s cup of tea, but I liked that I don’t have another piece of furniture sitting on the floor that I have to clean/clean around and it accomplished exactly what I was going for – getting the shoes off the floor. I’d love to know what you think! 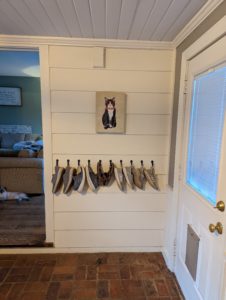 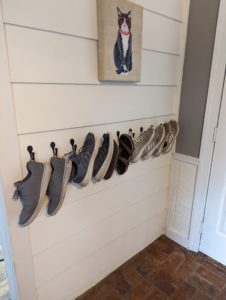